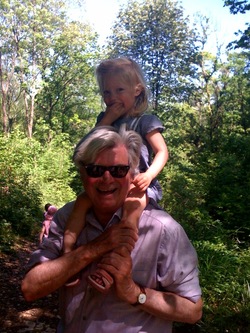 It is Michael, my late father, who we can thank for VCJ. He was one of the pioneers of creating highly desirable hand painted anodised aluminium jewellery.

Those of you who knew him you will remember had an unfathomable enthusiasm for and zest for life which was both infectious and inspirational to others. He found beauty everywhere and anywhere from battered old objects in charity shops to the latest dazzling model on the Mercedes forecourt. Born in 2001, the brand erupted from his passion for art and design and a fundamental desire to produce unique and highly desirable statement jewellery.

This passion began with painting and what you see as jewellery now first began as paintings during his art degree and later perfected during his jewellery MA. He mastered the techniques but it was his extraordinary imagination and his quirky eccentricities that gave him his distinct style and individuality which it is hard to imitate. He was prolific as an artist and jeweller and everyone in my family has the walls covered with his paintings and wrists adorned with bangles. Needless to say he lived in a colourful world.

He had always wanted a family business and I joined him in 2009. He was diagnosed with cancer in 2011 and despite putting up a good fight he died in 2012. He has gone well before his time as he had so much left to give but I am thankful that he has left us with so much. He died with his family around him and is greatly missed by us all.

Thank you for all your kind words and continued support. If you have any memories of him I would love to hear them.